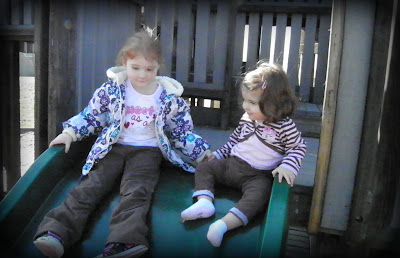 As thanksgiving approaches much reflection and taking stock of things has been happening. The time has flown by with all the gardening, child rearing and the explosion of my client base. There hasn’t been much time for solitary thinking or blogging, until now.

We hauled in over 300lbs of garden fresh produce and about 8 dozen eggs since August for our own enjoyment and sustenance. That doesn’t even count the 3 large boxes and 1 wagon full of green & ripening tomatoes in the garage right now. Prior to August we weren’t keeping record of our harvests but there were pounds and pounds of berries among other things. It’s crazy to see just how much food you can eek out of a garden.

Last night was the third night of Miss Adalyn sleeping THROUGH the night, at 15 months old. She’s also very ready to begin walking. Actually, she’s walking with the assistance of a push toy or dollie stroller or with holding one of your hands…

While she’s not toddling about yet, she sure is climbing everything! She made it up the stairs by herself tonight, then called to us from upstairs to announce her victory. She also climbs up in her sister’s bed, on to our glass coffee table, in to chairs and more. It’s quite an adventure!

Everly is miss independence these days and is dabbling in asserting herself in all sorts of ways. She’s eager to write the alphabet and is an avid bug collector & observer right now. She brings jars of bugs, mud and greenery in the house. Joy!

We are introducing her to a Montessori style homeschool classroom next week, hoping that it gives her an outlet for her budding independence, her drive to learn and that it’s a nice break from the monotony of being stuck in the house all winter with a web designing mommy and a baby sister.

2012 marks our first 100% gluten free Thanksgiving! We’ve been coming up with creative ideas for the menu. So far we have:

It’s rough to relearn how to make favorite dishes sans the gluten, but with Nathan helping me, it’s been more manageable and less of a bummer these last few weeks.

We just tried out an amazing banana custard recipe that I would have never stumbled upon had we not started looking for more creative, gluten free treats. I also found a yummy cranberry cheesecake that sounds delicious (it needs a gluten free pie crust substitution) but we really don’t need to make three thanksgiving desserts.

One thought on “Over 300 lbs of produce, first steps and sleeping at night…”