Everly and Adalyn are growing so darn fast. Everly turns four this weekend and Adalyn will be two in two months. They are still just blowing our minds each day, in various ways. 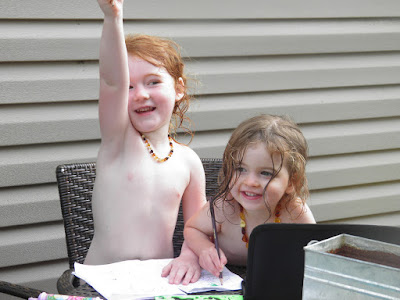 Everly is a great big sister but she really does have her annoyed big sister moments too. Man, do I remember feeling annoyed with younger siblings often as a kid. So I can sympathise with Everly.

Adalyn just follows her big sis arround, gladly plays the sister-slave role when Everly requests to be catered to.

I had to intervene when Everly convinced Adalyn to try wiping her butt one day. That was one for the memory books!

Luckily, it’s becoming more of a give and take between them. Everly also does fetch her sister things when she’s upset and she goes out of her way to make things better when Adalyn isn’t happy.

They are really just two peas in a pod but they butt heads sometimes too! Really, Adalyn is scrappy and will smack or get herself handfuls of Everly’s hair when she is upset. Also, they are both quite strong willed so I’m constantly searching for new tricks and approaches to things. Now I’m fretting over normal kid developmental stuff and not health & diet stuff, it’s nice.

The diet modifications have helped Adalyn so much. She’s a totally different girl when she’s not having gluten. It’s been so long since we’ve removed gluten from the home that her good days are just her being Adalyn now. When she was a baby it was the total opposite. She was the perfect picture of a colicky, high needs baby even beyond her infant months. Endless fits of temper-tantrums where she’d be inconsolable and upset over the smallest (sometimes even unknown) triggers.

I’ll admit, there are still times when gluten sneaks in to our mouths, intentionally or unintentionally. In very small amounts gluten doesn’t disrupt things much but during an experiment we found that, when allowed to have it, Adalyn will scarf it all down immediately. Then she’s instantly hyperactive and the following days are filled with endless meltdowns, emotional turmoil over everything, poor sleep and elimitation disruptions.

It’s true what they say, if you crave it or eat it constantly, chances are it’s not serving your body well and should be phased out for some time. Too much of anything is BAD and damn, gluten is in EVERYTHING!

It’s amazing just how much a simple food sensitivity can shape a child’s behavior and I’m so glad we were able to pinpoint the culprit and help her to feel better.

Now we are on to teething, which also makes her an emotional mess. She’s an emotional girl when not feeling her best.