I’m really unimpressed with electric fencing. We already decided that we wanted permanent fencing for our “barnyard” where the barn animals will have free rein. Heck, we even invested in the rolls of fencing and it’s laying out in the grass near the area that needs fenced in.

Shortly after we bought the fencing I was pretty adamant about hubby fencing off my garden space. You see, I’ve sold shares for our family’s first ever CSA project this year so it’s pretty important that the goats don’t smush down the chicken wire fencing and eat all the food I’m growing for other families this year.

The problem is I’ve only got my hubby for 1.5 days each week and that time is spent on our family’s farm chores, his daddy duty with the girls and perhaps his own relaxing or hobbies… Time for fence hanging is in short supply and fence hanging isn’t a one person job.

The fence rolls are about 100lbs each, it takes both of us to unroll a section of fence and then it takes us both to get the fence staples nailed in (one person to tension the fence and one to do the hammering)… So, the completion of fence work has taken a backseat but we thought a moveable electric fence might be a nice temporary solution in the meantime. Plus, we would like to set up pasture rotations with the electric fence later down the line.

So one of the 1.5 days free was set aside for electric strand fencing. We started with a single wire at something like 7000 volts then we added a second electrified wire and then a third “dummy wire” that isn’t hot yet but it will be once weeds are trimmed.

Training animals on an electric strand fence takes tons of conditioning and we are in he throes of it now with the three goats the two goat kids and the two lambs… Plus we’ve added a Great Pyreneese rescue dog, named Winnie, to the mix.

This morning I took Winnie off her chain link tie-up for some fence testing. She seemed like she was going to be fine until she ran and then jumped through the electric strand fencing. I don’t think you get a shock if you are jumping through the air! Then she seemed like she was sticking close to the house, inside the invisible fence perimeter. She tried to cross the invisible line, got a shock, cried and came back… Then five minutes later I see her outside the perimeter invisible fence jogging up the road. I call her back and she just looks at me and keeps running- “eff you lady!” is what I imagine she was thinking.

At the exact same time our ornery goat also decides she will go between the electric strand fencing wires. She gets a good shock, cries, kicks and just keeps going till the wire breaks. Her two babies follow her. I take chase after her. We run two laps around the house and she’s sill evading me so I grab one of her babies, show her I’ve got it and then I head back to her fenced enclosure to deposit the baby. Mama always follow her calling baby! Unfortunately baby head butts me with his horns twice in the face while I’m holding him. Ouch!!

Finally I’ve got mama goat and two babies back behind a solid fence and I tell them they get no field grazing time due to bad behavior. Bad goats!

I turn the electric strand fence off so I can repair the broken wire, there are still two goats and two lambs that need to NOT break free. Once the fence is repaired Winnie comes sauntering back all rolled in some animals poop- after we just shampooed her yesterday (did I mention she was skunk sprayed two days ago?!). Then I walk to the mailbox across the street to deposit some outgoing mail and on my way back I see Winnie has returned home with a special treat- a deer leg. 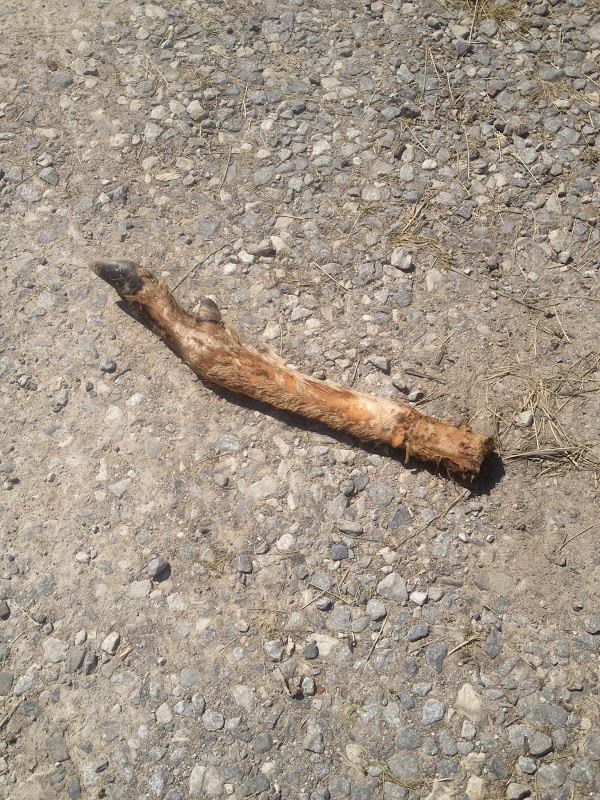 So, that is how my morning is going so far. I think I need more coffee!

One thought on “Electric fencing is a pain in the ASS!”