It was a nice sleepy morning, the outdoor temperature was cool enough to leave the windows open and the AC off. The days have been getting shorter and the mornings sleepier plus the baby sort of slept through the night snuggled in our bed with us.

As the sun began to rise the sound “cawwwwwr” made it’s way in the bedroom window, it was jarring. I laid there bkinking the sleep from my eyes and instincually checking to see if the noise had roused the sleeping baby.

I hear Nathan quitly making his way out the door to investigate the sound, I hear the deck gate open and close. By the second “acawwwwwr” it hit me. This sound that is similar to a small animal dying is our chickens.

At first I was wondering if a chicken was hurt and dying… but I’d been telling my mother and Nathan that one of our hens was especially agressive, and had a funny build. Kind of like a rooster but nobody agreed with me. Surely we’d know it was a rooster by now, they were supposed to be all hens from the pet store…

It’s the sound of an adolescent rooster learning his call! A rooster, our hen is a rooster. Helga the burly mean hen is a he! 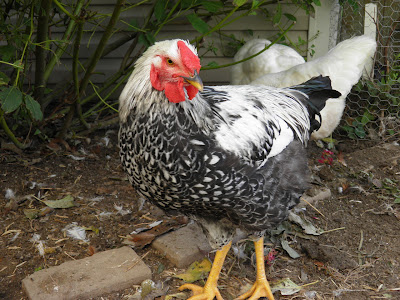 Now, if you’ve never had the pleasure of hearing a rooster learn his call, it’s really is quite terrible and funny at the same time. When they are first learning it’s nothing like the sounds you’d expect a rooster to make.

Once the realization hits me I make my way down the stairs to find Nathan coming in from outside. “That little shit is so proud of himself, fluffing his feathers and screaming from the top of the chicken coop…” Nathan says to me as he’s heading to the garage for some chicken treats to shut the rooster up.

Sure enough the chicken snacks quiet them down a bit, though he still tries to make his pathetic call every now and then. I am sure the neighbors love us today, we’re surely on EVERYONE’S shit list this fine saturday.

Obviously we can’t keep him from a noise complaint perspective. We are so close to our neighbors that it’s just not fair to them so chicken soup is on the menu.

If we had more land I’d be okay with one rooster, it sure would mean we’d have a self sustaining chicken flock… but we don’t have land and we can’t just do what we want with an HOA and all these people around us…

Helga has got to go in the stew pot so Nathan has begun watching how-to videos on the internet in preparation for his job ahead. He feels confidant and it seems we’ll learn an new aspect of homesteading/ self reliance in the coming week, a first hand lesson. We are about to butcher our first chicken for food.

Nobody crowed this morning or last night so that is nice for the neighbors… But, I just witnessed what appeared to be a “rooster spat” with feathers fluffed, chests puffed and them jumping at each other while kicking & pecking. It seems another of our Wyandotte’s looks much more like the rooster than the hen. See those waddles? What do you think? One rooster or two? 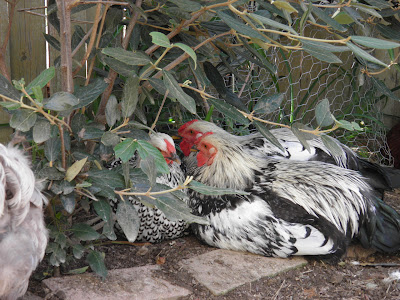 One thought on “Then Helga Crowed…”