I’m trying to not count my eggs before they hatch but we might be swimming in chicks soon! Let’s see, where was the beginning of this chicken saga? I believe it all started when we found our beloved Bernice, an Americauna hen, dead near the stock trailer. She was from the first batch of chicks we bought back when Everly was a newborn. She laid us greenish blue eggs. Here is a photo of her trying to hatch eggs in our compost bin this last spring: 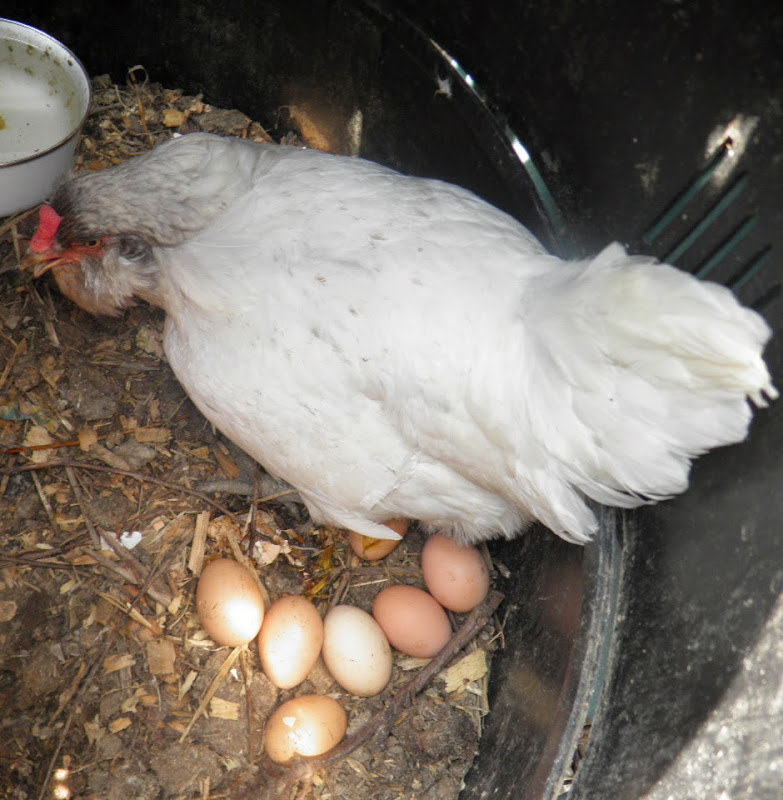 We recently found her dead in the yard, no signs of trauma. I thought her neck might have been broken from our too aggressive roosters, we had five roosters and they were all competing and sometimes gang raping hens. After Bernice I tried to separate all but one rooster from my hens. In the process Snowball, Everly’s new cattle dog, was asked to help catch a leghorn rooster for us. She didn’t succeed and we ended up giving up on catching him. He didn’t go in the coop to be locked up overnight either.

The next morning Snowball took care of business, a bit too well. We found feathers all over the yard and Snowball was missing. Later that morning we found her down the road in a cow pasture unsure how to navigate the ditch that was separating her from the road and our house. Nathan found her and nearby there was a dead, half eaten leghorn rooster. Snowball remembered the command she was given and the rooster she was supposed to get… and she got the job done a good 18 hrs later. Unfortunately, we didn’t want her to kill him, just to help us round him up. We still have some cattle dog training to do. She wont be helping us “get” anymore animals… for now.

The day Bernice died she laid one last egg. I saved it and four other blue & blue green eggs from the week for future incubation. About a week later Nathan built us an incubator (a coolerbator, it’s really from a Styrofoam ice chest!). We are trying to hatch 7 eegs in there right now. One is a double yolk that we’ve candled!

A few days later our other cattle dog, Dixie, sniffed out something odd in the bushes near the goat pen. It’s one of our new hens from this spring’s chicks… she’s broody in the brush out there. She’s been sitting 5 days that we’ve counted, day and night, rain or shine… with just an afternoon break each day as the sun shines down through the tress on her clutch of eggs. We take her some food and check the eggs now and then, I counted 9 eggs. We tried candling about 5 of them over the weekend. They aren’t as developed as our eggs in the incubator, so they seem younger. Here they are: 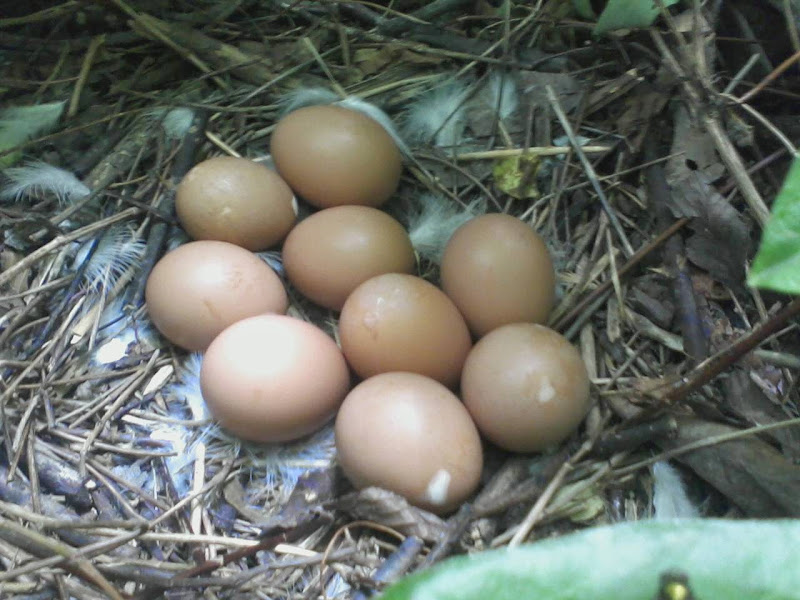 I should also mention that we just placed a baby chick order too… 15 chicks of preferred breeds for egg laying and breeding, to arrive next week.

So let’s do the math- 7 eggs in the incubator + 9 or more eggs under our broody hen + 15 chicks on the way. We might have close to 31 new chicks next month. Crap!