If labor does seem to start on Thanksgiving I can always just stay home in the birth tub (my doula thinks I totally will) to have the little guy. Seriously though, we DO fully entend to go to the hospital, even if our doctor is out of town because we know his backup provider will also honor our birth plan.

The pregnancy is still right on track, I’m up to over 30 lbs in gained weight and 14 gained inches around my waist since becoming pregnant. Nothing worrisome has cropped up medically and I’m still looking healthy as a horse with a strong baby growing inside. Though I do feel as uncomfortable, unmotivated and done as any pregnant lady in the home stretch.

I’ll probably see the doctor just two more times before it is time to deliver (every two weeks) and my birth plan was signed off on so I’m feeling pretty good about being respected and left to bring this little guy into the world the way it feels instinctual while still in the hospital setting.

I’ve packed up my stuff and the baby things we’ll need at the hospital but the hubby and kids still need their things packed. I’ve been nowhere near as productive as I’d hoped in terms of making meals ahead so we’ll have them after we get home. I have managed to dust a few things and do some very minor cleaning of the house though. I’m kind of banking on getting this major energy boost right before labor, maybe I’ll make some meals ahead then?

Speaking on making meals, we are making Mastoni “countertop” yogurt now which is very exciting for us. We’ve had many failed attempts at making yogurt that requires heating up milk and have finally found success with our new Mastoni starter. We’ve also been making sweets like mad. Nathan just tried out a gluten free danish recipe and I’ve whipped up several banana crumb cakes for eating and freezing… plus we made caramel apples with the kids. We also have a batch of wine, a batch of beer (Grayson Beer) and kombucha going and soon we’ll have sourdough bread going too. Oh and I made some gluten free apple sauce granola to replenish our granola stash (recipe to come!).

I’m busy sewing five holiday stockings from old sweaters this year. I’ve got finishing touches to put on Adalyn’s baby blanket and I’ve got the little guys baby blanket started too. Plus, I’m refurbishing my well used and loved cloth diaper stash in prep for baby brother. The diapers need new elastic and I’m converting them from velcro to snaps.

For about two weeks or so I was really being owned by the sugar cravings, again. I’ve made a large dent in the halloween candy stash and my sore feet/ legs returned. I was also napping during the day again and feeling pretty sluggish and tired most of the day… and I was reminded that I must keep up with consuming enough probiotics and magnesium to keep these symptoms of mine at bay. After just a few days of upping my intake I’m feeling like a new person again, even at 36 weeks pregnant. 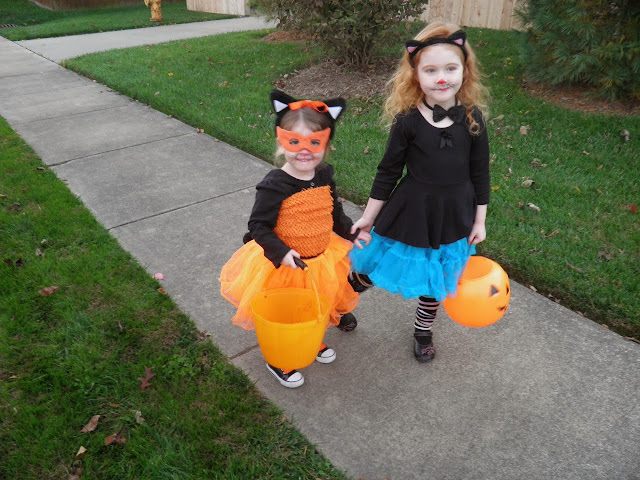 The girls had a wonderful Halloween, they both went as cats (Everly as a less skanky version of Catwoman and Adalyn as Kitty Claws). Of course, we made a point to visit Holiday World one last time before the 2013 season ended (they are hooked and obsessed with going there) and now we are looking ahead to a quiet Thanksgiving (just the 4 of us) and the arrival of our newest family member shortly after.

Adalyn asks me daily if it’s time for baby brother to come out and Everly is still speculating about what his hair color will be, she’s also now announced she wants to help daddy “catch” him. Adalyn just recently brought up “Nene milk” (breastmilk) and tried to inspect my breasts, she’s not been nursing since early pregnancy many months ago but she seems to have picked up on the coming lactation. Hubby is having many sympathy symptoms for me too.

Everly has also been all about the birthing stuff these days, from telling us she wants to see baby brother’s hair color as he’s crowning to making up bedtime stories about when my water broke “the whole room filled with water up to peoples chins…” We are all very excited and ready to meet him! It’s time for me to really get in my birthing zone, let the count down begin!